You are here: Home > About Us > Our History > PGS War Memorials

Following the restoration and display of our remembrance plaques, we continued with our historical digging and uncovered an amazing piece of Pudsey Grammar School history relating to two ex-PGS students from back in 1916.

Harold had been a draper's apprentice but had gone on to serve in the 16/130, 16th Bn, West Yorkshire Regiment (Prince of Wales's Own) and died on 1st July 1916 at just 19 years of age.  He was the beloved son of Fred Coe, J.P. of Toft House, Pudsey.  Harold is remembered with honour at the Thiepval Memorial.

William served with the 2426, 1st/6th Bn, West Yorkshire Regiment (Prince of Wales's Own) and lost his fight on the 1st July 1916 at an unknown age.  William was the son of Charles and Florence Allum and lived at Leigh House, Stanningley.  He is remembered with honour at Connaught Cemetery, Thiepval. 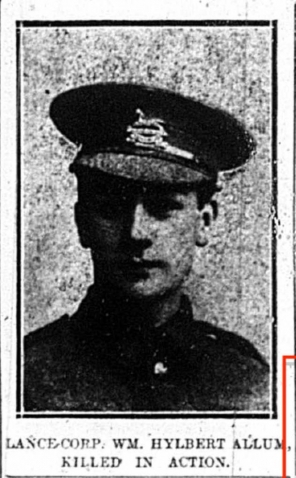 Were Harold Glover Coe or William Hylbert Allum relations of your family?  If so, please contact the school at info@pudseygrammar.co.uk

Ofsted Good report 2019 'Behaviour, both in lessons, and about the school, is good'. We still have places available for our Open Evening on Thursday 7th July and Open Morning on Monday 11th July. Visit our website at https://t.co/XhKFvGhMJ0 to book your place. https://t.co/Fu9hvaWWTQ

Ofsted Good report 2019 - "The behaviour of pupils is good" To secure a place to attend our Open Evening on Thursday 7th July or Open Morning on Monday 11th July visit our website https://t.co/XhKFvGhMJ0 https://t.co/C1DKP0A6TT